… *sharp whistle*. It’s been a stupidly long time since we did a State of the Mind address, hasn’t it? Well, let’s crack some knuckles and get on with the show.

So, what has been happening? Well, I got out of my self-induced lull and have been busting keyboard keys trying to get new works out there. Enough so that it’s actually beginning to drive me insane with the workload.

Back on May 18th, I began work on the new version of Under a Falling Sky. I set a deadline of having (at the very least) the first 60,000 words of a first draft done by July 1st. To help track it, I wound up making spreadsheets and everything to help it along.

I’ve been, for the most part, keeping steady with the estimated requirement (1,364 words-per-day). There have been scenes that have slowed me down to a crawl, or nights where other things wound up interfering with the time I set aside for writing. At the same time, there have been weekends and days where I can make up the difference. Thus, I am still on-track to have that first 60,000 done on time.

At the same time, while writing it, I’ve been making notes about scenes and characters to add, dialogue and interactions to better show off, or even marking where existing scenes will need severe re-writes. 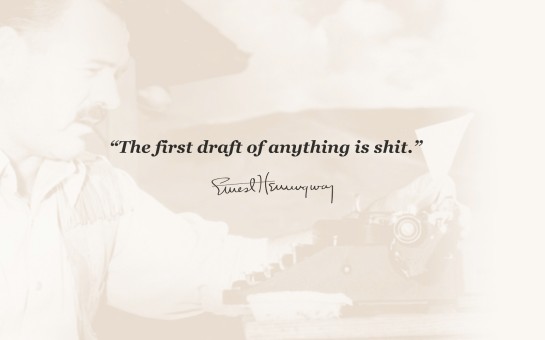 Words I am living by.

Now, why July 1st? Well, that actually leads into some news that I am excited to talk about. In the next couple of months, a flash-fiction story of mine that was accepted by Fireside Fiction Company will be published in an upcoming issue. I’m still working on the exact date (I had originally heard the July issue), but I will let you all know when it comes time for release or as it becomes available.

I wanted to make sure I had something well on the way to being roughly completed by the time that story releases. Try to capitalize on any hype and all of that, show that there was something on the way and that I wasn’t entirely sitting around on my ass.

What this schedule has done is obliterate any and all free time I had. Days are spent at the day job, I squeeze in about an hour of R&R, and then I move straight on to writing through the night. It’s tiring, and it’s made me appreciate weekends all that much more (cut out the day job part for a couple days, more time for R&R), but I can’t deny the progress that has been made.

I’m slightly behind where I should be at the moment, sitting at 25,000 words when I should be at 26,000. Over the span of (roughly) 2.5 weeks, I’ve managed to pen half of the bare-minimum for a novel draft, which is good progress in my mind.

However, the progress doesn’t stop there. I am also currently working on a piece of flash fiction for another magazine submission. I have the story mapped out in my head, though I will likely have to cut parts off like it’s going out of style to condense it to fit (1,000 word-cap). I am looking forward to seeing how that goes, but if nothing else, I want it out of my head and onto paper.

What this all has done, outside of create a mountain of work, is limit my time for entertainment. Lone Survivor, which I saw in theaters and loved, came out and I haven’t had a chance to see either it or RoboCop yet. I’d normally watch it this weekend, but I am reserving that time for gaming and watching Edge of Tomorrow.

As far as gaming goes, I have a back-log of games consisting of A) more WildStar, B) more Watch_Dogs, C) Murdered: Soul Suspect, D) more Transistor, and E) wanting to go back and play the Freespace games. Yeah, not like I’m keeping track or anything.

Now, you might have noticed WildStar on that list. I have been playing since the head-start (though only level 17 due to time limitations), and have been enjoying the hell out of it. It has its own comical, action-y charm to it that soaks me in. Well, that and the (awesome!) player housing.

If anyone reading this is playing the game, you can go ahead and add me. I am currently playing on “Orias [NA]” as Exiles. My main character is “Ashayl”, though you can add my account nickname of “Darrow”.

What can I say, I tried to keep it simple.

So yes, that’s where we’re at for the moment. I’ll keep on working on Under a Falling Sky, along with work on the other project. I’ll also try and keep my sanity with some R&R, though I really can’t promise that. Until I see you guys online (or on Nexus in WildStar), see you around.

This site uses Akismet to reduce spam. Learn how your comment data is processed.